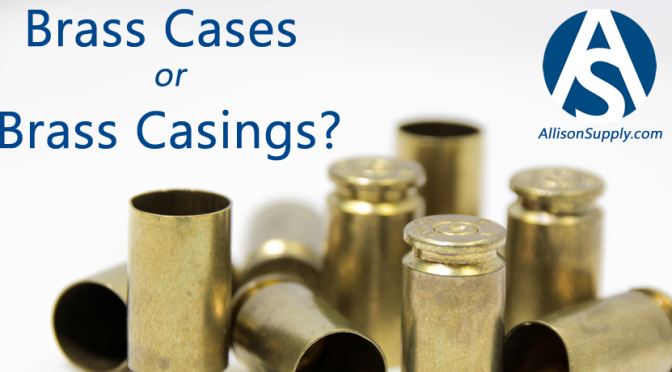 One of the pet-peeves of many gun-lovers is when someone refers to a loaded round of ammunition as a “bullet,” or when someone refers to a magazine as a “clip.” I’ve had similar feelings in the past when someone has referred to our pieces of brass by a term other than the one I was most familiar with. I’m speaking, of course, about whether they should be referred to as “brass cases” or “brass casings.” We’ve seen grown men almost come to harsh-words over what they should be called, so we thought we’d investigate a bit seeing as we probably say one term or the other at least a few hundred times a day in our office.

For the purpose of the discussion here, I’ll just call them “pieces” only to avoid confusion between the terms.

First things first: I don’t believe there to really be a functional difference, but I’m sure someone will prove me to be wrong on this one, and when someone does I’ll edit this part out immediately to destroy any record of my not being infallible.

The Illustrated Firearms Dictionary by Morris L. Hallowell IV uses the term “case” over 40 times to refer to these brass pieces, while only using the term “casing” once when referencing the same.

When looking at the brass manufacturers, most use “case” more than they do “casing,” but with the exception of Starline (who uses the term exclusively as far as we can tell) everyone uses the term “casing” at least once or twice in their marketing materials when referring to the pieces.

Not that being more widely used is necessarily proof that one is the proper choice, turning to Google for data we did see that “brass cases” was what people searched for slightly more often than “brass casings.” 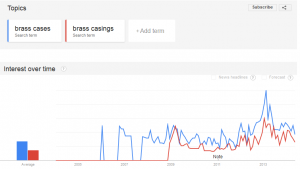 Now that tells us for what the reloader is probably searching, whether that is to buy (from us, of course) or just for their own general brass research.  Next is to see what is more popular from those who write about the pieces and/or offer them for sale.  The number of results for “brass cases” as compared to “brass casings” was tilted farther in favor of “cases” than I would have imagined, with “cases” having almost a 3x lead on “casings.”  (If you try to recreate the search use the quotation marks around the term you are searching for to search only for that specific phrase as written.)

There is a whole separate group of people who refer to the pieces as as “brass shells” (A rather large group when looking at the graph of interest!), but I’m going to hope that most of those people really are looking for brass shotgun shells rather than our brass cases/cartridges. While I’m sure it is also technically correct, I don’t want to further confuse the issue!

With apologies to New York and Pennsylvania, those two states really like using “brass shells” so I’m left to just assume that it is something peculiar to being Dutch?

Either way, tomato/tomato (Both of those are still spelled the same, right?), we’re ok with whatever you want to call them. If you think we’re wrong in our preference, or have some other evidence as to why one is absolutely correct, do let us know!